“The shiny voice of the morning”

Unique exhibition of the new ceramic collection called “Komitas” in Istanbul,
in an exceptional concert in tribute to the greatest Armenian musicologist.

Komitas, a priest, a poet, a great composer and an Armenian singer was deported on 24 April 1915. This great man, source of knowledge of Armenian singing, embittered by the murders, rapes and massacres committed during his exile, was sent to Paris for treatment, ending the last 18 years of his life in silence.

Thanks to his works of research and comilation, a lot of Armenian folk songs have been preserved to the present day.

Anadolu Kültür  organized this concert in tribute to Komitas, on Monday 7th October in Istanbul at the Salon of “Cemal Resit Rey”, for the one hundred and fiftieth anniversary of his birth. On tjis occasion, artists came from several countries to perform on stage: Aynur Doğan, Ertan Tekin, the Karatzayn Quartet, the band Vomank, Yerkaran Project, the band Goght from Armenia and Ara Dinkjian and Zulal Trio from the United States. This concert aims to introduce Komitas and to draw attention to the immense musical legacy he left us.

The Family Care Fondation from Armenia and the Muscari assocation from France are joining this exceptional event for a tribute to Komitas and also to our partner and friend Osman Kavala.

Family Care and Muscari present in preview the new collection of ceramics called « Komitas ». The symbolism is even stronger as this great poet and composer was born in Kutahya. A place where Armenians were renowned for their ceramic skills in the time of the Ottoman Empire.

These pieces are unique and handmade by ceramists from Gyumri’s craft workshop. Our ambition is to reconnect gestures and a genuinely Armenian arts and crafts tradition. We are committed to putting art at the service of the resurgence of a rifled past.

The spirit of Komitas, more than ever alive, continues to transcend the daily, transgress borders and pierce the false in the name of beauty. 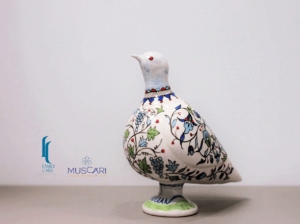 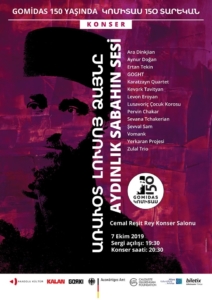 More infromation about the concert
Back

A mission of professionalisation for the ceramic workshop in Gyumri